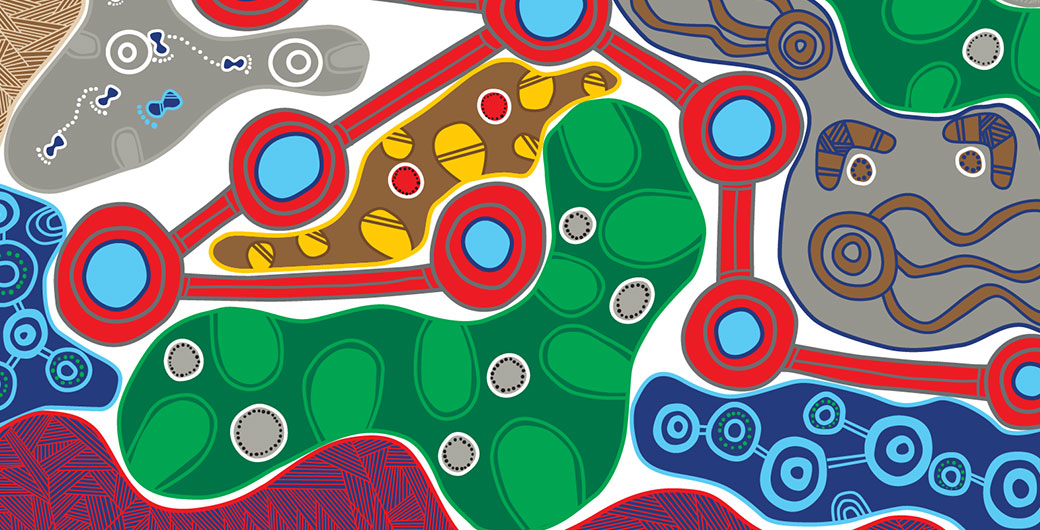 The conference – held in Melbourne on 20-21 February with the support of the Australian Department of the Prime Minister and Cabinet (PM&C) and attended by more than 400 delegates – provided a vibrant forum to reimagine the future of Indigenous Affairs in Australia and Aotearoa-New Zealand.

A total of 47 of the conference’s 54 speakers were First Peoples from Australia, New Zealand and the USA. Delegates came from across Australia and New Zealand and represented a diversity of sectors – public, university, not-for-profit and private — as well as Indigenous community leaders.

The report provides a full overview of the two-day conference, which consisted of a series of plenaries, including a keynote speech by Professor Marcia Langton AM, Associate Provost and Foundation Chair of Australian Indigenous Studies at The University of Melbourne, and four parallel streams of sessions which reimagined leadership, relationships, service systems and knowledge systems.

In Professor Langton’s view, governments need to stop imagining the limits of the policy space and be aspirational, focusing on what governments want to achieve rather than what they are likely to achieve in existing structures.

Michelle Hippolite, New Zealand Te Puni Kōkiri CEO, rounded out the opening session by asking delegates to think of ways to change the mindsets of their colleagues to overcome unconscious bias and institutional racism.

She emphasised that all individuals hold the power for change and that, “We can’t continue to do the same things if we want to get different results for Aboriginal, Torres Strait Islander peoples and Māori”.

The four streams allowed for deeper discussion of a range of issues including:

The conference dinner recognised strength and leadership through community awards, cultural entertainment and a keynote address from the 2014 Australian of the Year, Adam Goodes.

What governments need to do

Speakers at the conference reinforced a shared vision for the reimagining of public administration in Australia and New Zealand. This vision for governments is one that invests in Indigenous employment and leadership in the public service; recognises the need to reset relationships with communities; and acknowledges that Indigenous peoples, communities, culture and knowledge are central to delivering better public value.

Need for governments to operate in two worlds

Many Indigenous speakers told of the emotional labour of working in a bicultural context; a skill and task that non-Indigenous colleagues do not have to master, intellectually or emotionally. All Indigenous public servants have had to learn to operate in two worlds, if they are to thrive.

Governments can reciprocate, and reimagine their own leadership, by acknowledging the parallel need to understand the Indigenous experience. Governments can better handle the complexity of diversity by talking to those with Indigenous experience and understanding their lives – before deciding on a course of action. Approaching Indigenous communities with a question or challenge governments would like to work through, rather than presenting communities with pre-determined solutions, can be the basis for relationships built on mutual trust and respect.

“We can’t succeed without an investment in Indigenous policymakers. It’s about building capability, finding pathways to recognise success, acknowledging leadership, and building those pathways from the lowest levels of policymaking to the most senior policymakers.”

An international panel examined Indigenous governance models globally and the need to recognise Indigenous jurisdiction and authority.  The panel featured:

Dr Diver, a tribal leader, reminded us that Indigenous peoples know how to govern and have had their own forms of government for generations before colonisation:

“I want to challenge the idea of reimagining. We need to remember who we were before. We’ve been changed by contact and how the colonial institutions were set up to oppress, minimise and enslave us. But we’ve done this before. We know who we are.”

While the key message of this plenary was the success of independent Indigenous governance, Dr Diver also reminded delegates that strong Native Nations also need Indigenous peoples to occupy, disrupt and contribute to non-Native spaces.

The conference is part of ANZSOG’s journey to embed Indigenous knowledge and culture across all of its activities, and to help governments develop better policy in Indigenous affairs.

The report outlines ANZSOG’s next steps which will include developing targeted programs to support Indigenous public servants to achieve and succeed at senior leadership levels, investigating the establishment of a First Peoples Community of Practice in the public sector, developing ANZSOG Indigenous alumni networks across jurisdictions, and undertaking demand-led strategic research projects to improve Indigenous public administration.