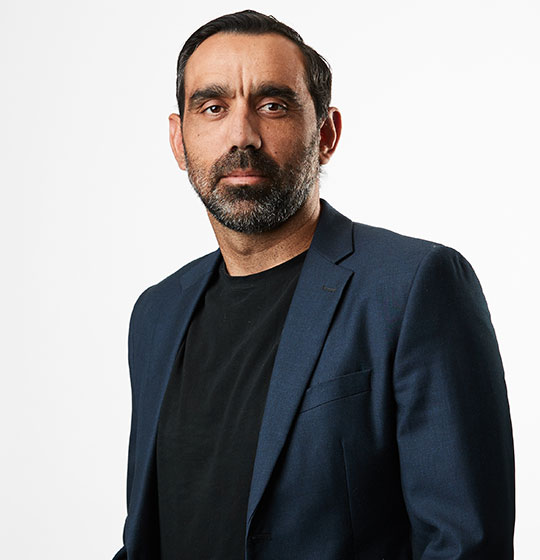 There are not many bigger names in Australian sport than Adam Goodes. Dual AFL Brownlow Medalist and premiership player for the Sydney Swans, four-time All-Australian, member of the Indigenous Team of the Century and representative in the International Rules Series, Adam Goodes holds an elite place in Australian Football League’s history.

But his career transcends the football field. In 2014, Adam was named the Australian of the Year. This distinguished award recognised Adam’s community work and advocacy in the fight against racism, empowering the next generation of Indigenous Australians.

Born in South Australia, Adam moved to Victoria as a young boy and developed a passion for AFL. His natural ability saw him ascend through the football ranks early, being drafted by the Sydney Swans from North Ballarat U18s. Adam soon became one of the game’s leading players and had a much-celebrated career spanning over 17 seasons.

He announced his retirement from AFL in September 2015, leaving the field as the Swans’ games record holder on 372, and one of the most decorated players of all time. Some of the many accolades Adam received during his career include: the prestigious Rising Star medal in his debut year (1999); leading his team as co-captain (2009-2012); celebrating premierships (2005 & 2012); and being awarded the AFL’s highest honour of Brownlow Medalist twice (2003 & 2006).

Adam is known equally for his involvement and leadership within the Indigenous community. In 2009, Adam set up The Goodes-O’Loughlin Foundation (GO Foundation) with teammate Michael O’Loughlin. GO Foundation’s vision is to create a brighter future for Indigenous children through education. In 2014, he joined the board of Supply Nation, a government-funded body aimed at growing the Indigenous business sector through the promotion of supplier diversity in Australia.

Adam’s work within the corporate world extends to advising large organisations such as David Jones and Lend Lease, on their Reconciliation Action Plans (RAP). He is also currently an ambassador for many prominent brands including Toyota, David Jones, Qantas and Woolworths. With the supermarket giant, he is a board member for Support Through Australia Natural Disasters (STAND), a disaster relief program founded by Woolworths and The Salvation Army.

Since retiring from AFL, Adam has been able to invest more time in the GO Foundation and his new business Indigenous Defence Consortium (IDC), which helps establish sustainable practices for Indigenous entrepreneurs.