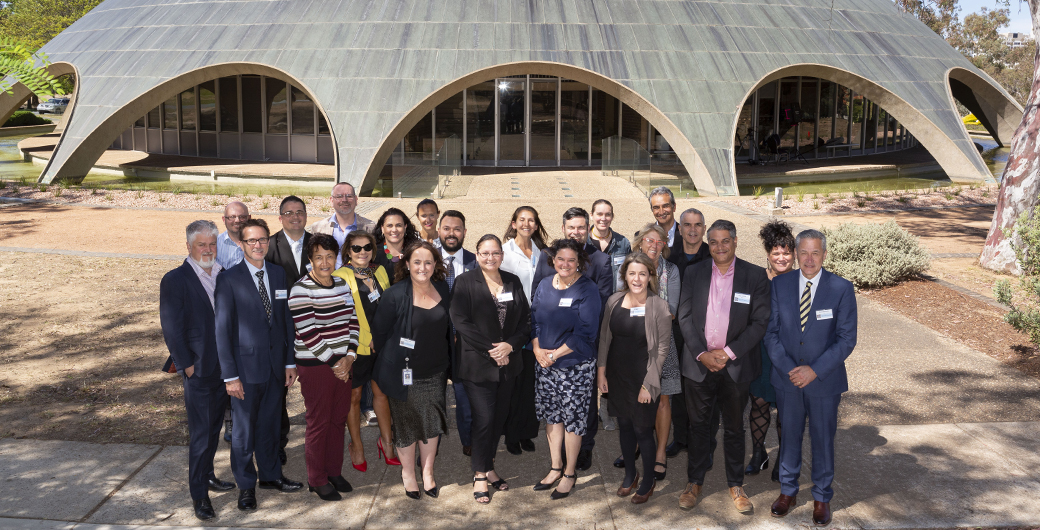 Senior public servants from across Australia and Aotearoa-New Zealand have discussed the need for a cross-jurisdictional community of practice for Aboriginal, Torres Strait Islander and Māori public servants to focus on best practice, including shifting the cultural mindset of non-Indigenous public servants and the importance of working on Country.

The Forum, supported by the National Indigenous Australians Agency, focused on Indigenous leadership in a changing public sector. The Forum’s next steps

The Forum’s discussions focused on ensuring that public sector agencies developed Indigenous leadership, and emphasised the need to support staff mobility in gaining experience across departments and sectors, as well as the ability to work on Country.

Forum participants discussed the difficulty in making the public service an attractive employer for Indigenous people, and the need to invest in cross-jurisdictional networks and the development of staff on the brink of the senior executive.

The Forum agreed it was important to continue working together between meetings, as a cross-jurisdictional network of senior Indigenous leaders. The group is well-placed to share best practice, solve public sector challenges and drive change to ensure better outcomes for Indigenous people and communities. The group agreed three priorities to action in the next twelve months, with the assistance of ANZSOG: Professor Ian Anderson, Deputy CEO of the NIAA, spoke of the journey in Indigenous policy over 40 years and said that it was “at the top of the curve of a major transformation in how we change leadership in our organisations”.

“We need to do more than manage grants, we need to build relationships, develop the idea of place-based approaches,” he said.

He said COAG’s decision in December 2018 to begin partnerships with Indigenous organisations, which has created an institutional structure to bring Aboriginal people into the decision-making table, had changed the way that COAG does business and would have long-term positive effects.

He said that Indigenous communities in NSW wanted governments to focus on strengths not weaknesses, and to support culture to build resilience.

“They want to talk about keeping Aboriginal people out of systems like justice and child protection, not just about improving our experience within them,” he said.

“They want us to invest enough, for long-enough to make change – no more three-year pilot programs – and to measure the things that are important to communities, not what government wants to measure.”

He said NSW was also looking at how Aboriginal people could be given the chance to amend historical records to add their histories to official documents. Two senior New Zealand public servants attended the forum and shared how New Zealand was dealing with the challenge of making institutions more responsive to the needs of Māori and ensuring that Māori communities had influence over policies that affected them.

David Samuels, chief executive of Te Puni Kōkiri (Ministry of Māori Development), said that Aotearoa-New Zealand’s Treaty of Waitangi determination process, which began in 1975, was now heading towards a conclusion with most claims having been settled.

“This process was necessary but left us in the past, we have now moved to where the Treaty becomes a future document,” he said. “Māori have now got equal rights but not achieved equitable outcomes in health, education or justice.”

He said that in New Zealand there were simply not enough Māori to work at the 40-plus government agencies, as well as the iwi or tribal organisations which now competed with them for staff. He added that agencies needed to look at how they could lift cultural capabilities more broadly.

Warren Fraser, Deputy Chief Executive, Te Arawhiti (Office for Māori Crown Relations) said the forum had made him appreciate how many issues Australia and New Zealand had in common – despite differences in culture and government structure.

“Public services can do better by building their own cultural capacity. In New Zealand they need to understand that what is an issue for Māori is also an issue for New Zealand, and that fixing these issues for Māori becomes part of fixing our own social capital,” he said.

He said that in the future, Māori-Crown relations would shift to a partnership arrangement, based on the Treaty of Waitangi. He gave the example of Oranga Tamariki (Ministry for Children) as an agency which had begun to work constructively with Iwis (tribes) and whanau (families), despite their difficult history with Māori communities due to their role in the uplift of children.

“They have worked as equals with individual Iwis to develop policies for children in need – policies to ensure that they are not taken from their whanau. They have worked together to determine what makes an appropriate home, what makes a good carer and these policies have led to tangible and positive differences. A key focus of the Forum was the need for a Treaty with Australia’s First Peoples, and the building of genuine relationships with communities that can be used to develop and deliver policy. Elly Patira, Executive Director of Treaty in Victoria’s Department of Premier and Cabinet, said that the Treaty process in Victoria was not an endpoint, it was the start of a new relationship between Indigenous and non-Indigenous Victorians, and part of her role was to determine how to transform the Victorian Government into a good Treaty partner.

“The Victorian public service was developed without an Aboriginal voice,” she said.

“We have moved beyond inclusion to diversity of voice and being engaged with on our own terms, through a range of avenues which have been determined by Indigenous people.”

He said the future of Indigenous policy was about building high expectations relationships – where communities and service providers were accountable.

Paulina Motlop, Director, Aboriginal Education Teaching and Learning in the WA Department of Education, said the Forum had been “an affirmation of the work that we are doing”.

“Public services need to understand that Aboriginal people bring strengths to the table: ways of knowing and being and doing, and people in the public service need to recognise that,” she said.

Ms Motlop’s work has involved developing an Aboriginal Cultural Standards Framework with a focus on ”high expectations, high care” which has had an influence across the WA public service. She has also worked with other Indigenous people in the WA school system to develop an Aboriginal aspirant leadership forum and leadership program.

“I was asked to set up a program, but I realised that we first had to take a step back and get Aboriginal input into the design of the program,” she said.

She said that she had benefited from coming to the WA public service after working as a teacher and as a Commonwealth public servant because it had given her a platform to question the status quo.

“You need to be always asking why: why do we have to do it this way? Why don’t we do it differently, because from an Aboriginal point-of-view this policy doesn’t work,” she said.

Mischa Cartwright, executive director Chief Minister’s Department of the Northern Territory, said that the NT was focused on local decision-making, getting communities involved in decisions on the ground, with a commitment to self-determination, and building the capacity of Aboriginal people.

“The best way forward is transferring government services back to communities, either community-controlled or with input into decision-making.”