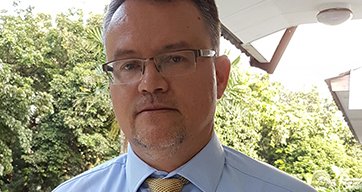 “Sessions with Professors Mark Moore and Dutch Leonard were incredibly intense and vibrant. They challenged us as human beings and leaders to reflect on our activities as leaders in our respective sectors and think about our leadership in the future, in a world going through massive changes that for many of them remain largely unknown.”

Q. Tell us about your career path?

A. I was born in Switzerland and was always attracted by international relations and prospects to work abroad. After graduating in political science from the University of Geneva in 1993, I joined the Japan External Trade Organization (JETRO, an organisation affiliated with the Ministry of International Trade and Industry of Japan) in Japan as a political analyst and networker to facilitate contacts between Japanese and Swiss industries. I was then recruited by the International Committee of the Red Cross (ICRC) in 1997, the start of a long and fascinating journey with the mother of all humanitarian organisations across countries in the Middle East, Africa and Asia. It was during an ICRC mission that I met my wife from New Zealand in Kenya (a geographic compromise between Switzerland and New Zealand…)

Q. Tell us about your current work at The International Committee of the Red Cross in Jakarta.

A. I was appointed as Head of the ICRC Regional Delegation to Indonesia, Timor-Leste in July 2014 with an assignment in Jakarta. Indonesia, which is Australia’s big northern neighbour with 250 million people, is a fascinating and challenging environment to work in: an immense archipelago of thousands of islands stretching over several thousands of kilometers, combining ethnic and religious diversity and Indonesian state assertiveness. The ICRC’s main effort during the last two years in Indonesia has been to rebrand its identity, adjust to the modern Indonesian reality and respond, in partnership with Indonesian/ASEAN humanitarian actors, to transversal challenges like countering violent extremism, communal tensions, maritime security, migration or emergency preparedness to large crises. Being the custodian of International Humanitarian Law (IHL), the ICRC also fulfils a diplomatic role by promoting the implementation of IHL through regular exchanges with the Government of Indonesia, Armed Forces and law enforcement authorities, ASEAN and diplomatic representations present in Jakarta including Australia and New Zealand.

Q. What were the highlights and challenges of the ANZSOG EFP for you?

A. Sessions with Professors Mark Moore and Dutch Leonard were incredibly intense and vibrant. They challenged us as human beings and leaders to reflect on our activities as leaders in our respective sectors and think about our leadership in the future, in a world going through massive changes that for many of them remain largely unknown.

The discovery of Singapore’s Public Service and its public housing sector was also a fascinating part of the EFP 2016.

Finally and most importantly, it was the time spent discovering and getting to know the 68 other participants from the EFP16 cohort. That was the most rewarding and exciting experience throughout the entire three weeks. I am truly grateful to have met all these great colleagues from Canberra, Victoria, New South Wales, Queensland, South Australia, Western Australia, Tasmania, Northern Territory and New Zealand. EFP16 has led to the creation of a new community of peers and it is up to us to make best use of it!

Q. What would you say to people who might be considering applying for the EFP?

A. The EFP is a very fulfilling and demanding course that is well tailored for senior managers in the public sector (and the not for profit sector). Its compressed form allows busy senior managers to set aside three weeks of their time for the EFP. The course goes over a range of aspects of leadership, especially focusing on the world of the future, which is changing rapidly. The EFP also looks at the need for senior public leaders to adapt and be flexible about what is coming to us. Managing our energy levels throughout the course was also very valuable advice provided by a participant of EFP15.

Applications for the 2017 Executive Fellows Program open in late April 2017.