The Melbourne School of Government and ANZSOG 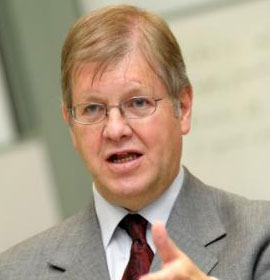 In his long career as Foundation Professor at ANZSOG from 2003, Professor Alford has been a key figure in building the School’s high teaching quality, its focus on practically relevant research and its collaborative relationships with partner government and universities. His leadership of teaching development was important, not least because of the extensive collection of teach cases he oversaw – no numbering almost 200. In recognition of this contribution, ANZSOG has named its case library after him, as the John L Alford Case Library.

Professor Alford joined MBS as a lecturer in 1988, having previously been a manager in the Victorian Government and a lecturer at the Royal Melbourne Institute of Technology. In 2007, he was made a National Fellow of the Institute of Public Administration Australia.

As well as leading the ANZSOG Masters subject Delivering Public Value, Professor Alford taught in ANZSOG executive programs for public sector managers. From 2003 to 2010, he directed the Executive Fellows Program. He has taught courses and workshops at 28 universities in Australia, New Zealand, North America, the UK, Europe and Asia.

His contribution to  research has also been noteworthy, with over 55 refereed publications in a wide range of  international journals, focusing on strategic management in the public sector, wicked problems, public value and public managers’ political astuteness. In particular, his work on client co-production of public services has received extensive recognition. The leading journal Public Administration Review described him as ‘arguably the most authoritative co-production scholar since Elinor Ostrom’ (2018). He won the Award in 2011 for Best Public Administration Book of the year form the American Society for Public Administration: Engaging Public Sector Clients: From Service Delivery to Co-production (Palgrave Macmillan). Seven other awards include his 2014 book, with Janine O’Flynn: Rethinking Public Service Delivery: Managing with External Providers, Palgrave Macmillan, which was judged Best Public Management book of the year by the Academy of Management. John was twice winner of the Richardson Award for the best article in the Australian Journal of Public Administration.

Professor Alford has been a Visiting Fellow in the Research School of Social Sciences, Australian National University, and a Visiting Professor at Utrecht University in the Netherlands and Copenhagen Business School in Denmark. He is a member of the editorial board of the American Review of Public Administration, Public Management Review, and the Journal of Strategic Contracting and Negotiation. He gained his MBA and PhD from the University of Melbourne.