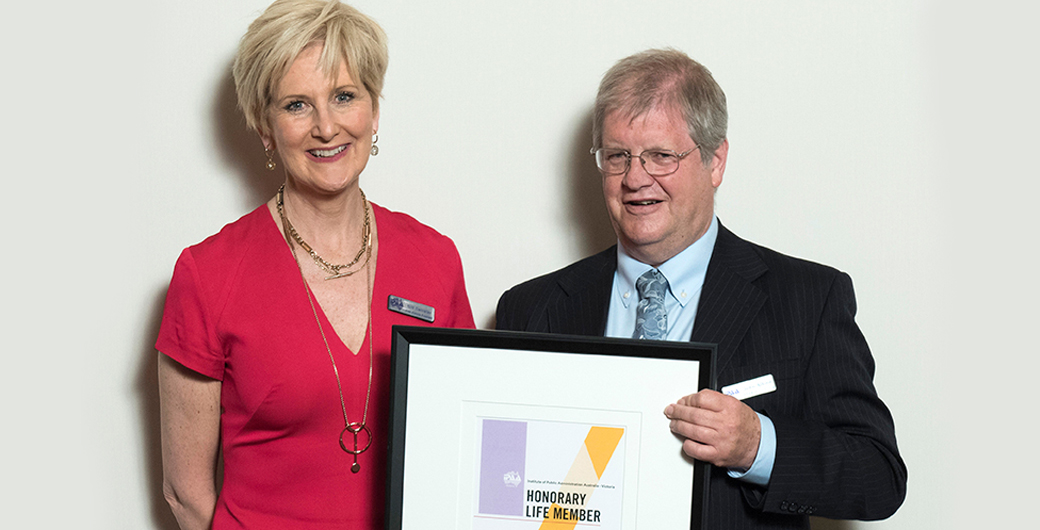 Professor John Alford has added another honour to his already glittering career, after being named an honorary life member of the Institute of Public Administration Australia, Victoria Division.

One of ANZSOG’s most respected academics, Professor Alford, who retired in August, was given the honour at the IPAA Victoria Annual Dinner and Fellows’ Oration earlier this week.

Gill Callister, Secretary at the Department of Education and Training (Victoria), presented Professor Alford with the award, describing him “a force to be reckoned with, particularly in the realm of public sector managerial training, where he has few equals”.

“Many people in this room will not only know John – but have been taught by him as well,” she said.

“I would encourage you all to rise to your feet and salute a wise and learned scholar – and one of our sector’s greatest ever teachers.” Elizabeth Proust AO, one of Melbourne’s leading business figures and chairman of the Bank of Melbourne, Nestlé Australia, and the Australian Institute of Company Directors, was also given life member status.

Find out more about our Executive Fellows Program here

Last week, the IPAA National Council awarded Professor Alford and ANZSOG research fellow Sophie Yates, the Sam Richardson prize for their article on  Co-production of Public Services in Australia: The Roles of Government Organisations and Co-producers.

ANZSOG Dean and CEO Professor Ken Smith said Professor Alford was unique in the excellence of both his research and his teaching.

“It has been an incredible advantage for ANZSOG to have an academic who is noted across the world for the quality of his research into public management, as well as his passion for teaching,” Professor Smith said.

“ANZSOG would not have the reputation it has for high-quality teaching without the outstanding work that John has done over the years.”

Professor Alford was Professor of Public Sector Management at ANZSOG until his retirement earlier this year, and has been one of the pioneers of the case method of teaching in the field of public management.

The Case Program is now widely respected across the world and was recently named the John L. Alford Case Library in recognition of his contribution to ANZSOG and the establishment of the case library.